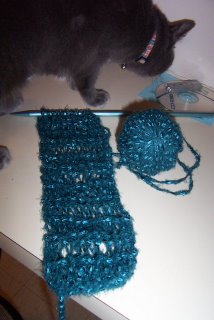 One of my girlfriends told me about a sale going on at Hobby Lobby this week, and somehow I miraculously left the store with spending only $20 but got enough new yarn for three new projects. I thought that I was hiding my yarn stash pretty well, but my boyfriend called on the way over and said "Don't you have enough yarn already?" Dang it! Gotta do a better job hiding it. He's not as oblivious as I once thought.

So, I picked up a new yarn for his mom since the last present got diverted to someone else. She's one of the trendiest dressers I've ever known, so I thought that I would make her a cute little skinny scarf with drop stitches. I'm sure that she has several dozen outfits to match it already. I used Yarn Bee Topkapi in the color Aya Sofia - it's Hobby Lobby's version of Bernat Matrix, only it has a little fuzzy component also.

She is coming out this way next weekend for her neice's graduation, so my goal is to have this finished before then. I think I can do it. I've barely put in 20 minutes at this point and I've gotten 3/4 a foot finished already. 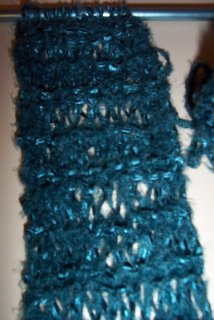 That is beautiful Amanda.Especially the nice teal color.

I just found that yarn today at Hobby Lobby for 99c.They have some of the Yarn Bee's for 99c a skein,but I couldn't decide what to buy.When it's that cheap you really should stock up.

BTW,do you happen to know if Yarn Bee has website where they publish patterns for their yarns? You know how alot of yarns come with a pattern sleeve.I may have been more tempted to buy it if there was a free pattern with it.

Yarn Bee Patterns can be found on the Hobby Lobby web site under Projects. Their newer sleeves are starting to come out with patterns on them.