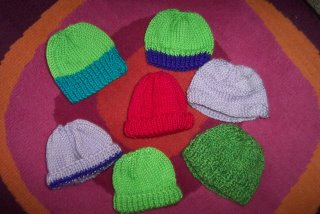 Tuesday was election day in Indiana, and I worked as a poll inspector. Between the gross weather and the unexciting races, turnout was really low - we had 59 voters all day. I wound up knitting two more baby caps to add to the collection (and played sudoku and ate like a pig all day!). I can't wait to donate all these little caps! I'm so excited. Maybe I will try to coordinate something with a few more people in the area.

I also taught someone how to knit and renewed two other lady's interest in the craft. Yay for knitters!!

This hats were all knit up with scraps of Caron simply soft yarn, with the exception of the one in th 5 o'clock position. It's leftover Lion Brand Homespun. I liked it a little better the second time I used it. I think it helps that I am a bit more experienced and don't knit as tightly now. I'm still not a huge fan, but I do love the way it feels when all knit up at the end.